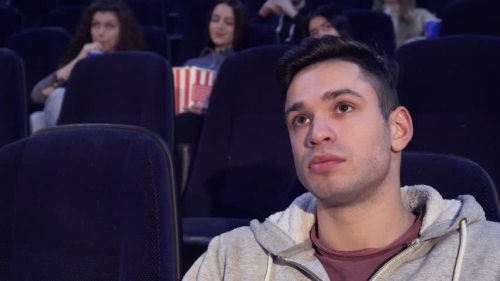 MISSOULA, MT – During a sold out screening of Despicable Me 3, the animated antics of American treasures Steve Carell and Kristen Wiig were consistently interrupted by loud crunching sounds. “The dude RIGHT next to me ate an entire small soda’s worth of ice!” complained stay-at-home dad Mitchell Waltrip. “And a small is massive, have you seen this shit? Everywhere else this small would be considered a large,” Waltrip digressed. What was supposed to be an excuse to get the kids out of the house that Wednesday afternoon quickly became a nightmare for the overtired father of three. “And the theatre uses that weird ice. Those cylinders with the hole in the middle that are like, too big for a normal person’s mouth,” Waltrip added. When asked to comment, the Carmike 12 theatre in greater Missoula confirmed the use of “weird ice” in their sodas. “That asshole was all, ‘crunch, slurp, crunch, pop, slurp, crunch,’ and I missed all the best jokes. Now I don’t get any of the references my kids are using,” Waltrip said. Numerous witnesses came forward and reported that, during one of the best sequences of the film, the ‘ice eater’ loudly tapped the bottom of his cup in an effort to get the last few pieces of ice into his maw. No patron in the 150 seat theatre, however, asked the culprit to stop. “You kidding me? I’m not gonna be that guy,” Waltrip scoffed. “I am gonna try and get a refund though.”